Biografie
Trunksleeve started in 2001 in Alkmaar.
In 2002 they released their first demo. This 5-track received very good reviews in the alternative press.
In November 2003 Trunksleeve recorded their second demo. This time they collaborated with sample-and-electronic-wizard Manic M (courtesy on U-lit records) in order to create some terrifying and spooky soundscapes. The 'Louder Than You' demo was again a big step forwards in the musical career of Trunksleeve and also received some international reviews.
In the press Trunksleeve is compared with bands like Kyuss, Soundgarden, Extreme, Slayer, Fu Manchu, etc.
In the summer of 2005 Erik left the band and was replaced by Bastiaan. With him the band recorded a live demo, did a lot of shows in the Netherlands and toured with German stonerrockers Desert Sun in both The Netherlands and Germany.
Bas left Trunksleeve in the summer of 2007. Long time friend of the band Dennis (who played in Flor De Mi Tierra and also plays in Mechanism) joined the band right after that. With Dennis, Trunksleeve is a machine again and ready to hit the stage! 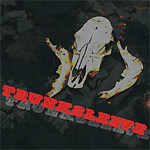