Dystopia is an extreme metal band from the tip of North Holland, founded in late 2004 by Willem and Cees under the name Imperial Dystopia after the need of expressing ideas and musical output. Soon Dennis was added to the line up and recruited to fill the guitar and vocal duties, and the band was ready to start.

In late 2005 things started rolling when they played their first gig which was a big success and a good start for them. More gigs soon followed, one of them being in the Waerdse Tempel, which is the second most-big stage in the Netherlands. Then the time came for some studio recordings to take place so in summer 2006 they took action and soon The Last Assault demo was finished, but never actually released.

Whilst recording this demo, the band name was shortened to Dystopia, and they recruited a second guitarist by the name of Isaron. Late 2006, plans were made to record a more professional demo available for the audience, which they recorded in the Undertone Recordings studio. It featured a far more aggressive sound and overall better song writing. The demo received great response and alot of gigs followed. Plans are being made to record a full-length this year.

Dystopia has increasingly developed its own style, combining the most extreme genres of metal which resulted in something that could be best described as a four headed bulldozer thrashing your neighbourhood, crushing anything on it's way!

Total annihilation - Live at The kade 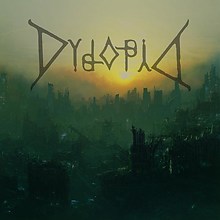 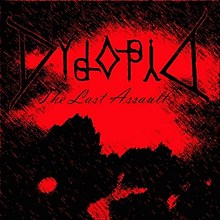